Not unlike my mushroom and chickpea soup, this does not start out as a soup. I make a large amount of this in bean casserole form, and then I pulverise half of it in me food processor. 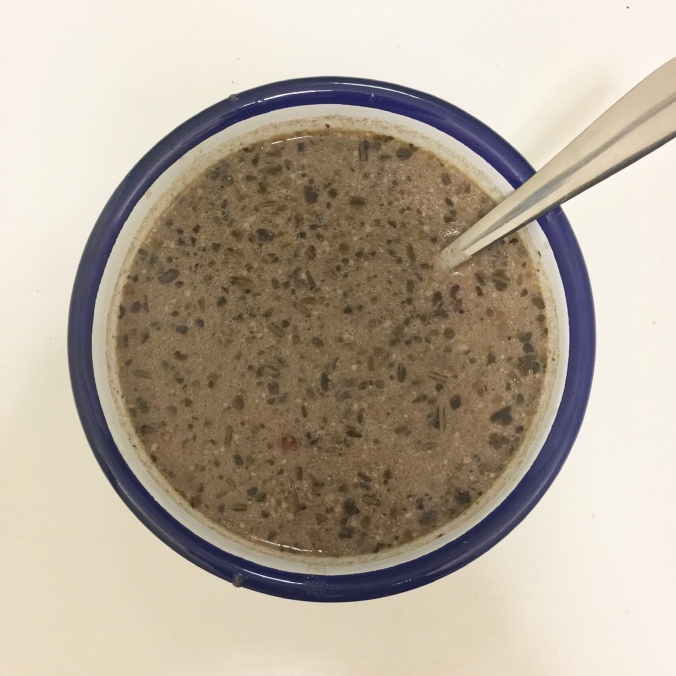 Add both cups of beans to a bowl, full and cover with cold water to soak overnight. If you don’t have time for this part, can’t be arsed, or simply don’t want to fuck about pre soaking beans, you can cheat and use canned beans.

Either way, when your beans have finished soaking their arses off, or when you have opened the cans, drain and rinse them thoroughly in cold water, and dump them in your slow cooker.

Yes I realise that’s a peculiar list of ingredients, BUT IT WILL BE BURSTING WITH BLOODY FLAVOUR TRUST ME.

Dump alllllll the dry ingredients on top of the beans, and combine until it looks a bit of a mess. Add the wet ingredients and water, and stir until stuff has melted in. Set your slow cooker to auto for an hour, and leave it alone to go and watch something terrible on telly like Jeremy Kyle. I personally favour Judge Rinder. It’s not terrible, IT’S BRILLIANT.

After the hour is up, go and prod the mixture, and do a taste test which will leave yer gob all tingly in the right way. Leave it to simmer for another hour on a low setting.

In casserole form, I serve it with rice, or I hack a crusty bread loaf to bits to dip in it.

To make it into soup, all you have to do is blend the fuck out of it in a food processor, and transfer back into the slow cooker to reheat. This soup is wonderfully tasty, and will keep you lovely and warm. I tend to eat an absurd amount of bread with it, to the point where I am a bloated bread monster with fuck all shame about it.